Welcome back to another informative article. Since the world is changing with new technologies daily, people also started to earn money by doing jobs from their home online through, digital marketing, affiliate marketing, youtube, blog, freelancer and so on. Even though we have more ways to earn from our home,  YouTube’s partner program is the best of all.
Since we will be paid for showing ads on our YouTube videos. So many of them has a question that which app will be the best for editing the youtube videos. Due to premium features in many video editing apps, youtubers and video editors have doubt in to which app they can get best features. 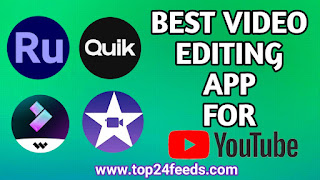 Many youtube content creators simply edit their videos with some useless apps which do not produce the video attractive. Sometimes those unknown editing apps may leads to damage and high battery consumption in mobile.
So it is necessary to find the best editing app which does not cause any side effects to your mobile. The apps which we are going to share with you is available on both the android and iphone platforms. Whether your channel has thousands of subscribers or only a few subscribers, you can use these apps in all cases, which is not depends on the number of subscribers or your channel.

Adobe has a good name in all their editing products. Adobe premiere rush is a mobile software for editing the videos with great performance, which is the mobile version of Adobe premiere pro (the desktop version). Since the desktop version of this app was not used by much editors, they introduced the mobile version and thus it also reached a high level in youtubers and people mind.
Most of the people used to buy this because of this brand itself because it is one of the top most leading company to produce editing applications. Adobe premiere rush doesn’t require any study or tutorial for editing videos, when compared to the software version.
Even a beginner can become expert in this app within a few days. Because of its drag and drop option, the app was loved by many people.
Random Read: AMD vs Nvidia: which is the best GPU
Adobe premiere rush allows you to add upto 4 video tracks and 3 audio tracks with customisable tools like, title, color, filter, sound reverberation, voice changer and speed adjustment. It also contains options like voiceover, ducking, and can also access graphics and imagery in Adobe stock.
Adobe premiere rush is available for both the android and iOS platform, and also has cloud facility of 2GB for free starter plan, where you can edit a same project in both the mobile and desktop version. 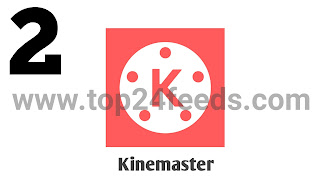 If you’re a youtuber and looking for green screen editing, then Kinemaster is the legendary app to remove and add green screen effects. It provides almost 90% of tools which a professional editing app has.
According to a research conducted, it is found that 60% of Indian youtubers are using kinemaster to edit their videos. Kinemaster is more famous for its chroma key tool, because it gives a better removal of the colour than other editing apps.
One more advantage of kinemaster is, we can use it in even old edition smart phones which comes after 2010. Editors can add upto 9 layers of video clip (depends upon the mobile) and 4 layers of audio clip.
Like other editing apps, kinemaster also has customisable tools like, heading texts, different fonts, colour, video-in-video and so on. The speciality of this app is, you can use various effects like graphics on your projects. You can also download different varieties of effects from kinemaster store.
Kinemaster is available on both android and iphone platforms. You can download it for free from playstore or app store. But if you want to remove ads and watermark means, you have to pay $5.
Random Read: What is the use of RAM in mobile

For iphone users, those who are beginner in editing, iphone has an in built editing app called iMovie which is used to edit videos on iphone. It doesn’t provide most of the tools mentioned in above editing apps, but provide tools which are required for video editing to upload on youtube.
Expert editors feels that the tools are not enough which are given on iMovie. But beginners and intermediates feels that it’s sufficient for editing. You can also directly shoot video and at the same time you can edit it with voice over option. There are also colour filters available to make the video more attractive.

The legendary app for GoPro users

GoPro cameras allows users to edit videos that are captured on their camera before directly uploading to youtube. GoPro’s Quick app allows GoPro users to sync the videos to their phone which are shooted on the camera and allows to edit with a set of tools.
This app provides tools like speeding up the video, colour filters, freeze, reframing and handy horizon level tool, which helps to fix wobbly camera work. The app also allows users to add stickers, graphics, sound effects, animations, voice changer,
The app also allows users to control the GoPro cameras remotely and also can preview live recording. This app is available on both playstore and app store.
Random Read: How does tv channels earn money

The best and easiest video editing app for youtube

Wondershare’s Filmorapro is one of the top most leading computer software for editing videos. And FimoraGo is the mobile version of filmorapro. The app has a good and unique look which makes easy fir beginners to navigate tools. It provides good colour effects and filters, graphics, titles, text animations and etcetera. Once you start to learn editing on this, you can easily create a professional video.
The app is available on both android and iphone platforms and the only defect in this app is, it doesn’t support 4k and cannot edit multiple tracks unlike the computer version.